“Beti Bachao, Beti padhao” but what after padhao? What is happening to our women after that? There is comparatively a decent amount of awareness (although, if awareness leads to desired actions is a debate for another time) about saving the girl child and educating her. But, what after educating her? That’s an ambiguous question that barely anyone knows an answer to on a broad level.  To assign numbers for visualisation, India’s Female Labour Force Participation Rate has plunged to a historical low of 20.34% in 2020. Unfortunately, the pandemic won’t be able to justify the abysmal numbers. India FLFPR has seen a sharp decline since 2005 and the pandemic may have only aided the glaring problem. To put things into perspective, we are one of the 10 countries with the lowest FLFPR in the world. For a country drunk on a pronounced misunderstanding of nationalism, it might help to know that Pakistan has a better FLFPR than India currently. 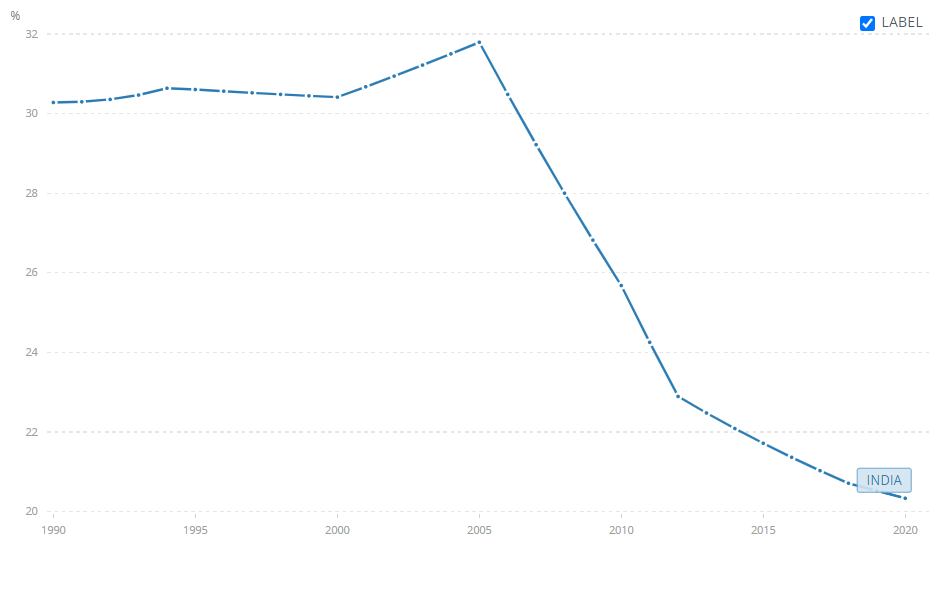 But what is FLFPR and why should we worry about it? Female Labour Force Participation Rate is the proportion of women in the working-age group (15y and above) who actively engage in the labour market, either by working or looking for work. The primary reason to push for higher FLFPRs is quite simple, with an influx in labour inputs the economy will have to grow to accommodate the labour and push to reach its potential. The average household incomes will also increase when both men and women work, leading to increased consumption of goods and services.

The decline of FLFPR has been more pronounced in rural India as compared to urban India in terms of the rapidness of the decline. With approximately 65% of the population living in rural India, this proves to be a daunting problem that has sought attention for years now. While the country as a whole appears to have progressed, the progress has been selective and rural India has been left out. The lack of basic infrastructure and opportunities plagues 65% of our population, causing migration to urban areas for job opportunities, which in turn has just been the problem of unemployment changing locations while consistently being ever-present. The multiplier effect of employing women is fundamental to solving many of the pressing challenges in rural India.

One of the primary reasons for the decline in FLFPR in rural India can be traced to the falling income standard and insecurity of returns in Agriculture where almost 73.2% of rural women are employed. The lack of adequate output, due to degrading land quality and shrinking water resources, compared to the input has disincentivised women to continue labour. Apart from that, the mechanization in agriculture to cater to the growing food demands is estimated to throw 12 million women out of agriculture jobs by 2030.

For women in rural India, where socio-cultural barriers are dauntingly high there is absolutely no incentive to fight the odds to stay in labour-force for an outcome which is lower than the overall cost they incur. The country runs many schemes to counter the ancillary factors to push for Female Labour Force Participation Rate but what it often has forgotten is without a goal, incentives do nothing. When there are no jobs available , with a marginal benefit they can see, the incentives don’t do much to inspire women in rural India to get employed or actively seek employment because they just don’t see any employment that is available for them to seek.

It is often argued that MGNREGA can be a panacea for increasing FLFPR and that cannot be farther from the truth. For one, MGNREGA is a social security scheme and not an employment scheme. While it’s true that 100 days of employment is better than 0 days of employment, it is equally important to confront the trade-offs in the process. Since MGNREGA sets a bar for wages, women are often passed over for men by employers in other sectors. The rationale on the employer’s part is, in the rural setting where they can get male labour for cheaper than why should they hire women? Therefore, MGNREGA is certainly not the answer to increasing FLFPR.

Source: Towards higher female work participation in India: what can be done?

Therefore, setting up textile and apparel manufacturing industries in rural India will provide jobs with adequate returns to the women there and will also nudge the women who are not looking for work yet to start engaging with the labour market to seek employment with pronounced benefits. Additionally, setting up these industries wouldn’t exclusively cater to women but also create jobs for men in the sector and outside of it through a ripple effect. An overall development in infrastructure can also be expected which can close the urban-rural divide on progress to a great extent.

Unfortunately, none of this can be implemented effectively without changing societal levers. The problem with the declining FLFPR isn’t just limited to the quality of jobs or incentives, it is also deeply rooted in the ignorance towards women’s participation in the workforce. One of the fundamental reasons for that is the fact that women for long have been made out to be individuals who need “help”. Instead of building agency, the idea of helping runs wild. It’s akin to giving someone a fish when you deem is the right time as compared to teaching them how to fish. “Beti Bachao, Beti Padhao” has been great in terms of sowing the seed of awareness that the girl child has to be saved and educated, yet the problem is there is no explicit understanding of what is going to happen after beti is educated. One of the focus areas for increasing FLFPR has to be normalising the idea of women going into the workforce and encouraging the same.

Gender equality in the labour market is not an end in itself but a key means to achieve wider human development goals that include poverty reduction, increased productivity and aggregate output, reduced fertility, infant mortality, and child labour; and greater decision making and bargaining power for women within households and outside (Mehrotra and Jolly, 1997). 2 thoughts on “What After Beti Bachao, Beti Padhao?”